A disorder of the antropyloric gastric junction affecting infants and manifesting as an exceptionally thick musculature causing gastric outlet obstruction is familiar as infantile pyloric stenosis (IHPS). Usually the neonates are born with no clinical symptoms. Nevertheless, in the post natal period, a non-bilious, vigorous, “projectile” vomiting ensues. Emaciation result from the gastric outlet obstruction terminating in death in untreated cases. Palpation of the thickened pylorus or “olive” is the mainstay of clinical evaluation. Precise abdominal palpation is contingent to determinants such as the investigator’s judgement, gastric distension and a sedated infant. With inconclusive clinical exponents, selective, contemporary imaging establishes the diagnosis.

Fabricious Hildanus depicted and chronicled the perpetuation and life expectancy in infants with hypertrophic pyloric stenosis in 1627 [1]. Surgical intervention is remedial and a frequent indication [2].

Infantile hypertrophic pyloric stenosis arises in 2 to 5 per 1000 caucasian newborns per annum, ranging with the geographic factors and the period of review. Asians and Blacks elucidate 20- 30% of the caucasian incidence. Male to Female ratio is 4:1 and it fluctuates from 2.5 to 5.5:1 [3]. The genetic susceptibility of infantile hypertrophic pyloric stenosis is polygenic, elucidating a. band wise concurrence in monozygotic twins as 0.25-0.44 and in dizygotic twins as 0.5 to 0.10 [4-8]. 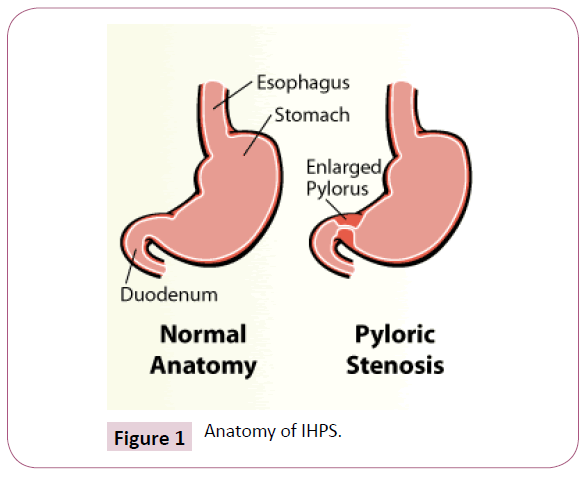 Morphology of the Malfeasance

In infants with hypertrophic pyloric stenosis, the pyloric ring is undetectable as a clear segregation between the capacious pyloric antrum and the duodenal cap. A variable conduit (1.5 cm to 2.0 cm) analogous to the pyloric canal is visualized, dividing the dilatable segment of the pyloric antrum from the duodenal cap. Muscular hypertrophy defines the groove which deftly transforms from the usual 1 mm of the distensible pyloric antrum to a 3 mm or up to 6 mm thickness in the expansive, archaic, hypertrophied pyloric canal [5]. The lumen of the pyloric canal ranges from 3 mm to 6 mm owing to a compressed, superfluous and protuberant gastric antral mucosa. The mucosa, characteristically on endoscopy, appears as a nipple like projection resembling a cauliflower [6].

Clinical Exposition is contingent to the duration of the disease. Early symptoms enunciate a classic projectile non bilious vomiting. The extensive emesis, on account of superimposed gastritis, is composed of blood tinged gastric contents Initially intermittent, the emesis becomes continual, subsequent to each intake. The infant displays an insatiable appetite, because of insufficient nutrition, notwithstanding a gastric distension. Malnutrition can aggravate the reduced functioning of hepatic glucoronyl transferase and induce indirect hyperbilirubinemia (1-2%). Gastric emesis triggers the sodium /potassium depletion and diminished hydrochloric acid terminating in a hypocholeremic alkalosis (Figure 2). A paradoxical aciduria emerges as the renal system intends to preserve the intravascular volume by exchanging hydrogen ions to maintain the sodium. Excessive weight loss, dehydration and the accompanying voracious appetite creates a classic facies of a furrowed brow, wrinkled skin, conspicuous cheek pads etc. The gastric dilatation with effective peristalsis is delineated in the hypochondrium of malnourished babies.

The condition is of obscure aetiology. A connection to thymic hyperplasia was revoked [1]. The nerve terminals are strikingly deficient in the hypertrophic muscle. Indicators such as nerve supporting cells, peptide containing nerve fibres, nitric oxide synthase activity, messenger RNA formulating nitric oxide synthase [7], the interstitial cells of cajal, the incorporation of insulin like and platelet derived growth factor and enhancement of insulin like growth factor messenger RNA are all implicated. The anomalous neural innervations of the muscle zone results in the inadequate relaxation of pyloric muscle. Integration of the growth factors with concomitant muscular hypertrophy and hyperplasia besides a reinforced mucosa of the pyloric canal, enhances the gastric outlet obstruction. The pyloric canal and the pyloric ring display a spacious lumen which, although congested and occluded with a mucosal surplus, distinctively envelops the muscular coat. The mucosa, on histology, displays a submucosal oedema and cellular inflammatory infiltrate. Prostaglandin treatment is incriminated in the foveolar hyperplasia which elaborates the malfeasance. The surmised hypergastrenemia genealogically amplifies the parietal cells, thereby escalating the acid formation, repetitive pyloric contractions and interrupted gastric evacuation. The malady progresses after commencement of feeding, with enhanced post prandial gastrin, and gastric acid secretion. Though sporadic at delivery, the outlet generally chokes at 2 -12 weeks. On ultrasound, the neonatal anatomy is discerned. The incision of the muscular coat alleviates the obstruction, although it may briskly regress to the normal configuration. Assays for nerve growth factors, interstitial cells of cajal and nitric acid synthase are restored within four months of surgical intervention concomitantly with the anatomic correction of the lesion. The obstruction, if circumvented, can promote the muscular hypertrophy.

The detection of a condition should preferably be systematic, non-invasive and immediately implementable, for a prompt diagnosis and interpretation. A clear cut demarcation between atypical occurrences is necessitated. The clinical features are representative and diagnostic. Palpation of the consolidated muscle mass or the OLIVE is characteristic in 85-100% of infants. Palpation necessitates a peaceful infant with a soft abdominal musculature, which could be problematic in a starving infant. Hence a nasogastric tube is introduced to analyze the gastric volume and contents [8]. Endoscopy has proved to be an efficient and precise technique to demonstrate infantile hypertrophic pyloric stenosis [6].

1. Peristalsis which is visible

3. Lump on the left abdomen

A deficiency in the relaxation of the prepyloric antrum prolongs the pyloric canal. Globules of contrast medium flows through the mucosal fissures and is described as the string sign, whereas linear streaks of the contrast medium partitioned by a healthy, uninvolved mucosa is delineated as the double track sign which is characteristic for pyloric stenosis. Fluoroscopy visualizes a dynamic, exertive peristalsis, ceasing suddenly at the pyloric antrum thus delineating the thickened muscularis externa and is denominated the shoulder sign. The tit sign indicates the temporarily captured luminal barium between the peristaltic waves and the muscle zone. The gastric peristalsis and momentum of the contrast medium between the pyloric mucosal interstices is perceived as a string/ double track sign. The morphologic alterations of the lumen delineated by the contrast medium assist in the ancillary appraisal of antropyloric canal. Pylorospasm, the condition in which the antroplyloric canal is unable to relax, could be erroneously labelled as hypertrophic pyloric stenosis. The sensitivity for detecting hypertrophic pyloric stenosis by the UGI examination is 95% but erratum is encountered in 11% cases [5].

Ultrasound examination with a high frequency transducer depicts corrugated extensions of the prepyloric antrum with the gastric and the duodenal bulb dilatation. The first indication of a gastric outlet obstruction. is a fluctuating dilatation and emesis. Inconstant muscular hypertrophy and a crammed, compact intervening mucosa extends into the dilated gastric antrum (nipple sign) and the luminal impaction can be visualized. The hypertrophic antropyloric canal ranges from 14 mm to 20 mm and the muscle coat is between 3.0 to 4.5 mm. A hypertrophic pylorus is defined as when the muscle layer is 3 mm or more. The gastric lumen elucidates a congested, superfluous mucosa and the gastric peristalsis abstains from dilating the pre -duodenal gastric segment. Anatomical configuration and data on the pyloric canal is unequivocally procured with the ultrasound. The advantages of the ultrasound are that the radiation exposure is negligible and gastric emptying is not essential. The pylorus can be differentiated from the gastro-oesophageal junction and the duodenal cap. It is a sophisticated technique for detecting a hypertrophied pylorus by an experienced examiner with a precision rate of 100%.

Commemorative surgical modifications have transformed the course of a hypertrophied pylorus with a markedly diminished mortality. Medical therapy comprises of a nutritional preservation, administering the pylorus and pharmacological agents. Surgical stratagems commenced in 1892 and elucidate the pyloroplasty, the preferred modality in the first decade of 20th century [1,9], besides the gastroenterostomy. The popular, definitive Ramstedt technique separates the hypertrophied muscular layer from the intact mucosa which is seen protruding amidst the laproscopic or conventional open incision [10]. The fatality rates for the gastroenterostomy is 53% and pyloroplasty elucidates a 40% mortality. The Ramstedt approach represent a <2% [11] morality rate because of an early referral, quick diagnosis, an efficacious imaging and an enhanced compliance with surgical intervention (Figure 3). 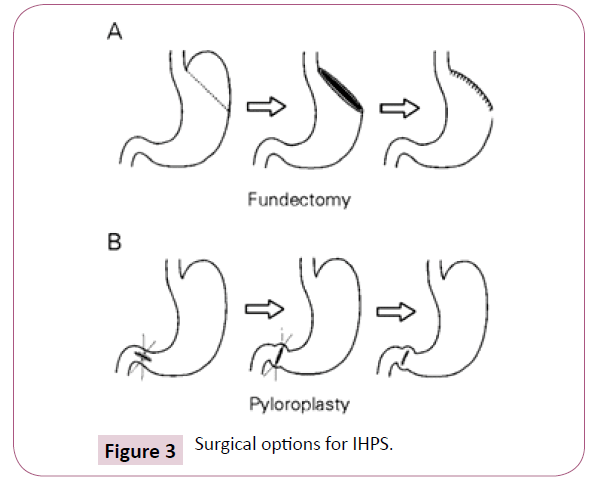