Methods: The RCT included an end-of-study questionnaire for subjects in the active arm to evaluate overall satisfaction with IBS symptom relief. A separate post-marketing study was conducted in the general population to assess real world satisfaction and dosing frequency of open label PO-SST in patients with IBS. The dosing frequency in the RCT was fixed at 2 capsules three times daily (TID), while the post-marketing patient population was allowed flexible dosing.

Results: Thirty-five subjects randomized to PO-SST in the RCT and 285 patients in the post-marketing study were included in this analysis. There was a high satisfaction rate (>80%) with PO-SST in both studies. Most patients in the postmarketing population (60.8%) used 1 to 2 capsules per day, and 75.6% reported IBS symptom reduction within 1-2 hours of ingestion. Patients in the RCT reported significant reduction in IBS symptoms 24 hours after the first dose of PO-SST.

Discussion: PO-SST showed a high rate of satisfaction among patients participating in an RCT and the general patient population. Symptom improvement was rapid and remarkably similar in both groups, despite the lower daily capsule intake by patients in the general population.

What is already known?

• Peppermint oil can be an effective therapy for IBS.

• Some versions of peppermint oil are poorly tolerated due to GERD symptoms and dyspepsia.

• Patients with IBS in a randomized clinical trial and in the general population reported consistently high overall satisfaction with relief in IBS symptoms and quality of life while taking a novel peppermint oil formulation.

• Peppermint oil designed with site specific targeting may be a valued option for patients who desire rapid relief of IBS symptoms.

• Increase the willingness to use peppermint oil as an ondemand therapy for IBS related symptoms.

• Facilitate additional evaluation of the mechanism of action of peppermint oil in IBS patients.

Irritable bowel syndrome (IBS) is a chronic functional bowel disorder with periodic exacerbations of multiple symptoms, including abdominal pain or discomfort, constipation, diarrhea, abdominal bloating, a sensation of incomplete evacuation, urgency of bowel movement (BM), pain at evacuation, and passage of gas or mucus [1,2]. According to the Rome III criteria, IBS can be subtyped based on predominant bowel habit patterns into mixed IBS (IBS-M), diarrhea-predominant IBS (IBS-D), and constipation-predominant IBS (IBS-C) [3].

Patients with IBS often have symptoms that are severe enough to impair quality of life, result in significant utilization of healthcare resources, cause high rates of absenteeism from work and school, [4] and endorse a high rate of dissatisfaction with the treatments they receive for their symptoms [5]. Furthermore, limited options are available for patients with IBS to obtain rapid relief during symptomatic flares. L-menthol, the primary active component of peppermint oil (PO), has been shown to possess anti-spasmodic, anti-serotonergic, anti-inflammatory, anti-bacterial, kappa opioid agonist, and carminative properties, making PO an attractive therapy for IBS [6-11]. However, unreliable delivery with single-unit, enteric-coated, liquid-filled PO capsules has limited their benefit—especially with heartburn and dyspepsia side effects [12].

The Irritable Bowel Syndrome Reduction Evaluation and Safety Trial (IBSREST), a 4-week, placebo controlled, randomized clinical trial (RCT), evaluated the efficacy of a novel PO formulation utilizing site specific technology (PO-SST) involving solid state, triple-coated microspheres of highly purified PO designed to provide rapid, reliable, and sustained release of PO in the small intestine [13]. Patients receiving PO-SST experienced significant relief of multiple individual IBS symptoms as well as improvement in symptoms rated as severe or unbearable compared with placebo, without significant adverse events observed with previous PO preparations [13]. In addition to individual symptom improvement, patient satisfaction with therapy was an important endpoint in IBSREST that has not been previously reported. The trial was conducted at 4 geographically diverse study sites in the United States, in accordance with good clinical practice and applicable regulatory requirements and ethical principles. The protocol was approved by the Chesapeake Institutional Review Board and the Palm Beach Clinical Research Organization (West Palm Beach, FL, USA) was responsible for conduct of the study.

A separate post-marketing evaluation of open label PO-SST,the IBS Adherence and Compliance Trial (IBSACT), was also conducted in order to determine real-world daily PO-SST capsule usage frequency and patient satisfaction in a general population of patients with IBS. Herein, we report the overall satisfaction with relief of IBS symptoms for patients in both studies as well as the real-world daily PO-SST capsule intake observed in the IBSACT.

The details of the IBSREST have been previously published.(13) Briefly, patients met Rome III criteria for IBS-M or IBS-D, had average daily IBS-related abdominal pain of ≥ 4 (0-10 scale), a Total IBS Symptom Score of ≥ 2 (0-4 scale), and were 18-60 years of age. Subjects had to conÃÂ¯ÃÂ¬ÃÂrm that they were not planning to change their usual diet and lifestyle during the study. Patients with a diagnosis of IBS-C or IBS-unubtyped as deÃÂ¯ÃÂ¬ÃÂned by the Rome III criteria or a history of inÃÂ¯ÃÂ¬Ãâammatory or immune-mediated gastrointestinal disorders were excluded from the IBSREST. The protocol did not allow concomitant or rescue medications during the trial. The IBSACT included patients who were using openlabel PO-SST (marketed as IBgard®) in the general population of patients with IBS. There were no restrictions on concomitant medications for patients participating in the IBSACT. The POSST formulations were identical in each study and PO-SST was indistinguishable from placebo in the IBSREST trial.

Patients in the IBSREST were randomized to receive either PO-SST (2 capsules, each containing 90 mg of PO) or identical placebo three times daily (TID) for 4 weeks. A 7 question endof- study questionnaire (Table 1) was utilized to evaluate overall satisfaction with the relief of IBS symptoms for all subjects in the IBSREST. Patients completed the written questionnaire during their last study visit, prior to unblinding. Counts and percentages of subjects with each response were tabulated only for subjects randomized to the PO-SST treatment group.

Patients in the IBSACT were allowed flexible dosing of PO-SST. A 10 question survey (Table 2) was conducted with patients who were using PO-SST in the general IBS patient population to assess patient satisfaction and dosing frequency in the realworld setting. The study questionnaire was included in PO-SST physician samples, giving all patients receiving PO-SST samples from their physician the opportunity to fill out the questionnaire. Patients submitted survey responses online or via fax.

Patient perception of change in quality of life after receiving PO-SST was assessed in both the IBSREST and IBSACT by asking the question, “Overall, how would you rate the improvement in your quality of life during the treatment period?” Patients were given three response options to choose from: no improvement, moderate improvement, or major improvement.

Thirty-five subjects with moderate to severe IBS randomized to PO-SST in IBSREST completed the end-of-study questionnaire to evaluate overall satisfaction with IBS symptom relief. Sixteen of these patients had IBS-M and 19 patients had IBS-D. Demographics for this population have been reported previously [13].

From the general population, 285 patients with IBS, who had received PO-SST samples from their physicians, completed the IBSACT survey. Demographic information was not collected with the IBSACT survey. The majority of patients in IBSACT reported suffering from IBS symptoms daily (62.9%) or twice a week or more (23%).

Patients in the active arm of the IBSREST had a statistically significant reduction versus placebo in total IBS symptom score (Figure 1) and abdominal pain (Figure 2) at the first follow-up assessment, 24 hours after their first dose [13]. IBS symptom reduction occurred within 1-2 hours in 75.6% of patients surveyed in the IBSACT (Table 4). Figure 1: Total IBS Symptom Score (TISS) at baseline and after 24 h of treatment with PO-SST or placebo. TISS = mean intensity and frequency for each of 8 IBS symptoms (abdominal pain or discomfort, bloating or distension, pain at evacuation, constipation, diarrhea, urgency of BM, mucus or gas, and sense of incomplete evacuation) summed and divided by 8. Percent reduction from baseline is shown above brackets (*P = 0.0092). P values are from generalized linear models with baseline score as a covariate. 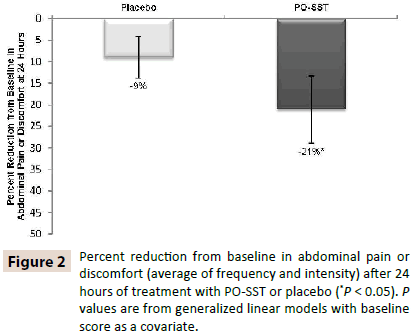 Figure 2:Percent reduction from baseline in abdominal pain or discomfort (average of frequency and intensity) after 24 hours of treatment with PO-SST or placebo (*P< 0.05). P values are from generalized linear models with baseline score as a covariate.

Table 5: Improvement in symptoms and perceived quality of life with PO-SST.

Table 6: Recommendation and continuation of PO-SST*.

This analysis found that patients reported a consistently high level of satisfaction with the novel PO-SST delivery system used in the IBSREST and in the IBSACT real-world study of patients with IBS. In addition, real-world usage data from the IBSACT revealed that 60.8% of the patients using open label PO-SST only needed 1 to 2 capsules per day to achieve adequate relief from IBS symptoms, which is considerably less than the 6 daily capsules patients received in IBSREST. In the IBSACT, overall satisfaction with PO-SST was 85% or higher, even with lower usage of PO-SST capsules compared to the per protocol dose used in IBSREST. In addition, the responses for all questions from patients in each study were remarkably similar despite the lower capsule intake by patients in the IBSACT population (Table 1).

The current analysis is subject to some other limitations; including the subjective nature of the data collection and reliance on patient recall for both the IBSREST end-ofstudy questionnaire and the IBSACT survey. The surveys relied on the patients’ perception of improvement rather than physician measurement of improvement. In addition, although the IBSACT survey collected data on the frequency of IBS symptoms as reported by the patient, the severity of symptoms was not assessed and the demographics of patients was not collected. Adverse event data was not collected in the IBSACT survey. However, PO-SST was well tolerated and the adverse event rate was low in the IBSREST study in patients that received 6 capsules of PO-SST daily [13]. Finally, since the design of the IBSACT was as a post-marketing study, there is the possibility that patients who did not experience a clinical improvement with PO-SST may have been less likely to respond to the surveys included with the PO-SST provided to them, possibly leading to inflated estimates of patient satisfaction. It is striking, however, that patients with IBS in a RCT as well as in an open-label post-marketing IBS population reported a similar degree and onset of symptomatic relief and overall improvement in IBS symptoms and patientperceptions in changes in their quality of life while taking POSST. The majority of patients taking PO-SST reported overall improvement, especially in abdominal pain, cramping, and bowel regularity, making PO-SST an option for patients who desire rapid relief of IBS symptoms.

This study was funded by IM HealthScience, LLC.